Who says wildlife does not know how to smile for the camera? 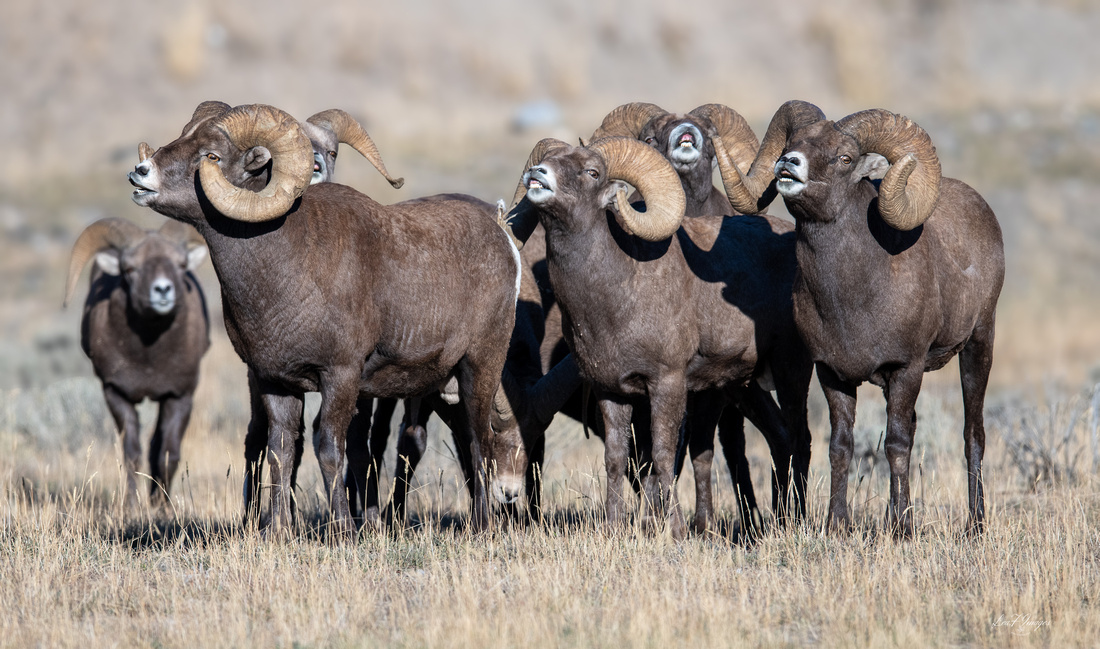 Say Cheese (Bighorn Sheep)The only time you can make a bighorn sheep smile is when it is that time of year and there is a ewe nearby.
Taken near Gardiner, Montana

Today I would like to introduce my husband, Scot Bealer. 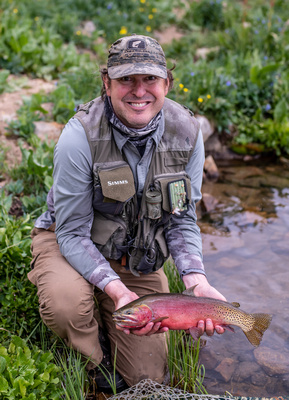 Scot often accompanies me on my photography trips as two sets of eyes are always better
than one when trying to locate wild animals. We have a shared love for the outdoors and wildlife which is why we make a great team. Not only does he have a degree in biology, but he also knows a good deal about tracking animals and has been teaching me along the way.  When Scot is not out with me you will often find him fishing along one of our many small streams, high country lakes or world famous rivers of Montana. Fly fishing is his obsession and has been since he first discovered the sport.

You will find that Scot's stories behind the pictures will add a different perspective and feel to this blog. He is no stranger to writing as he writes blogs for Madison River Fishing Company (MRFC) based in Ennis, Montana and I supply the photos.

The story behind this particular photography outing was one I had to let him write as he really captures the humor well. So with no further introduction, enjoy the story.

Sometimes you just have to laugh! by Scot Bealer

Wildlife photography is a serious business. When Lea and I are in the field, sometimes we spend hours together hardly saying a word. Quiet is the rule when a noise at the wrong time can send that priceless picture running off into the woods. Then came the day last fall where a bunch of sheep were putting on a slapstick comedy show worthy of the three stooges. I finally lost it, and started laughing out loud. Lea looked at me in horror for breaking the silence, as the sheep were quite close, but when they ignored me and continued with their antics, she eventually broke down and started laughing too. Who would have guessed that sheep have a sense of humor, and at times evidently go all out when they know they have an audience.

We have seen a lot of bighorn sheep over the years. They aren’t that hard to find if you know where to look, and Lea has lots of fun pictures. However we never managed to find them during the fall rut, or to get pictures of the classic head bashing for which they are so famous. Last year we decided that we were going to change that, and committed ourselves to getting out in the field at the right time, and finding some sheep in action!

It didn’t take long, and we knew the game was on. We found a bachelor herd of large rams hanging out about a hundred yards away from a good sized herd of ewes, grazing together along with some lambs from last spring. Everything was set, except that nothing was happening. The rams were all hanging out like a bunch of buddies. Grazing together peacefully and showing no interest in the girls at the other side of the field. We were starting to think that yet again our timing was off, when all of a sudden two ewes broke away from their herd and trotted right up to the group of rams. One of them moved right into the middle of their group and squatted to pee. Then the ewes galloped back to their friends, and turned back to watch what happened. Talk about a couple of instigators!

The males all clustered around where she had made her mark, shoving each other to get the best position to smell what she left, and then in unison, stepped back and smiled for Lea and her camera! (actually this is called a flehmen response, commonly seen in male ungulates when they are sniffing to determine if a female is in estrus, or otherwise ready to mate) Then the fun really started. No, they weren’t bashing heads together. They started sizing each other up, glaring at each other with a little shoving. Just like a bunch of 3rd graders on a playground. Then it happened. Ball smacking. Yep, they started walking around kicking each other in the privates. Repeatedly! 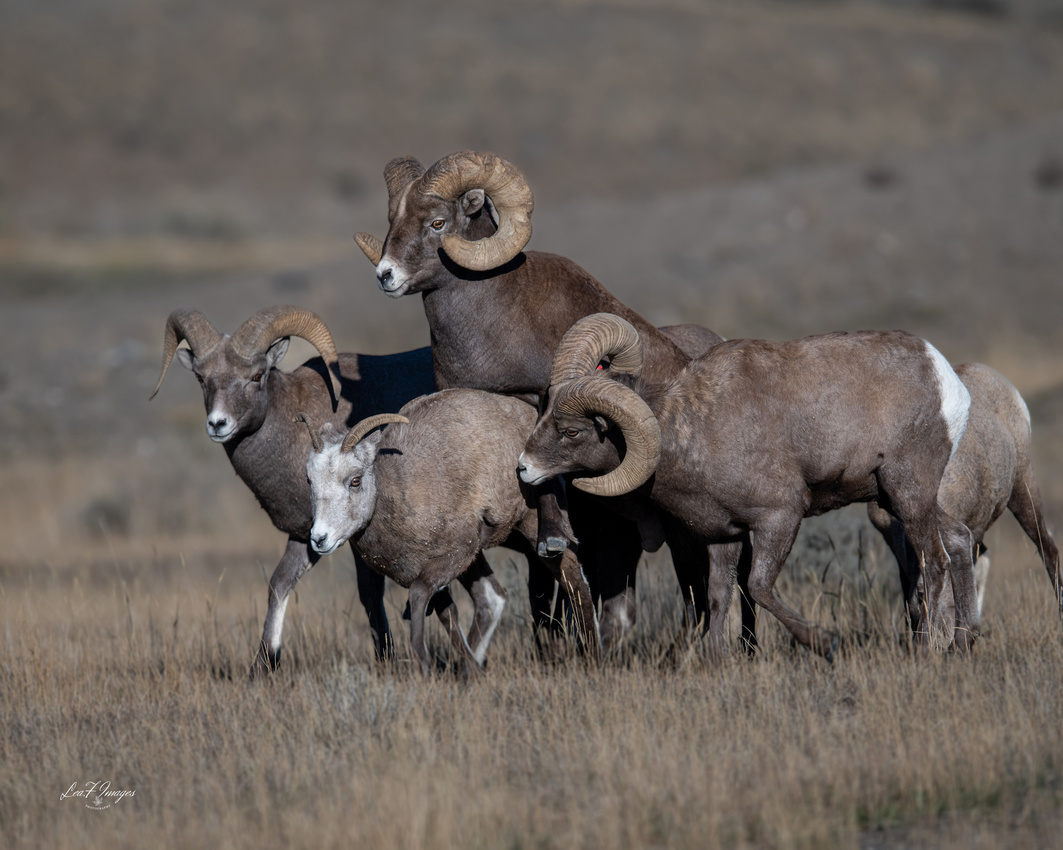 A ram would walk up to the hind quarters of one of its buddies, and by lifting its front leg, it would start tapping the other sheep right on the nuts! I could hear the voices of Curly Larry and Moe. Can you feel that? Huh? Huh? Huh? How about now? You got nuthin down there do you! You better not flinch, the girls are watching right over there and they’ll think you are a wimp! 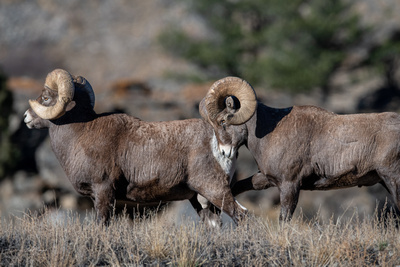 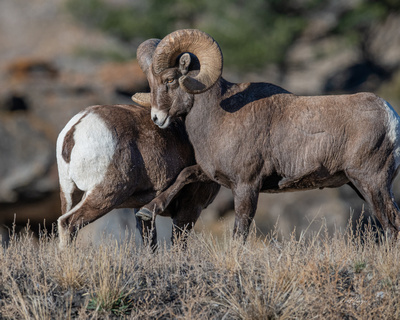 I couldn’t help myself. First I let out a small giggle, but it quickly morphed into full throated laughter. Lea eventually lost her composure and started laughing too. They were whirling around each other busy trying to kick each other in the balls! Some of the kicks were hard, and eventually one would respond with a full on head first charge and the ramming would begin. Yeah, they butted heads occasionally, and Lea got some good shots of that as well, but who knew about the other part? The nature shows I saw on TV as a kid certainly never showed anything like that! 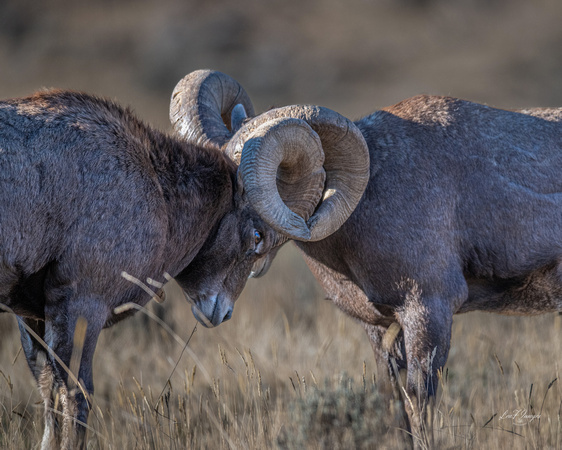 They eventually got tired of the game, settled down, and went back to grazing. Just when we thought the show was over for the day, two ewes trotted back to the group of rams. Don’t know if it was the same two, but they sure had the same evil smirk on their faces as they ran up to the boys. Let the giggles begin again!

Want to read more from Scot Bealer? Stay tuned to this blog or visit the MRFC Blog where he has written several short fishing themed blogs.

Sign up for my newsletter and you can receive my blog in your mailbox.

Get a print on demand canvas print at Fine Art America:

Molly Bealer(non-registered)
Enjoyed the blog. What a life you have. I’m so glad you found each other.
Sue(non-registered)
Great story and well told. Thanks for the laugh and the insider knowledge that even Animal Kingdom forgot to share!
No comments posted.
Loading...
Recent Posts
Rainbow Hues of the Wood Duck Who Is In My Backyard? What It Takes to be a Wildlife Photographer - Part 1 Time to Smell the Flowers (Black Bear) Mesmerizing Stare American Dipper Small and Fierce Backpacking Season Can't Touch This (Sora) Here's Looking at You
Keywords
wildlife Montana bird photography Colorado Helena Water Wildlife photography bear Wildlife Photographer
Archive
January February March April May June July August September October November December
© Lea.F Images
User Agreement
Cancel
Continue