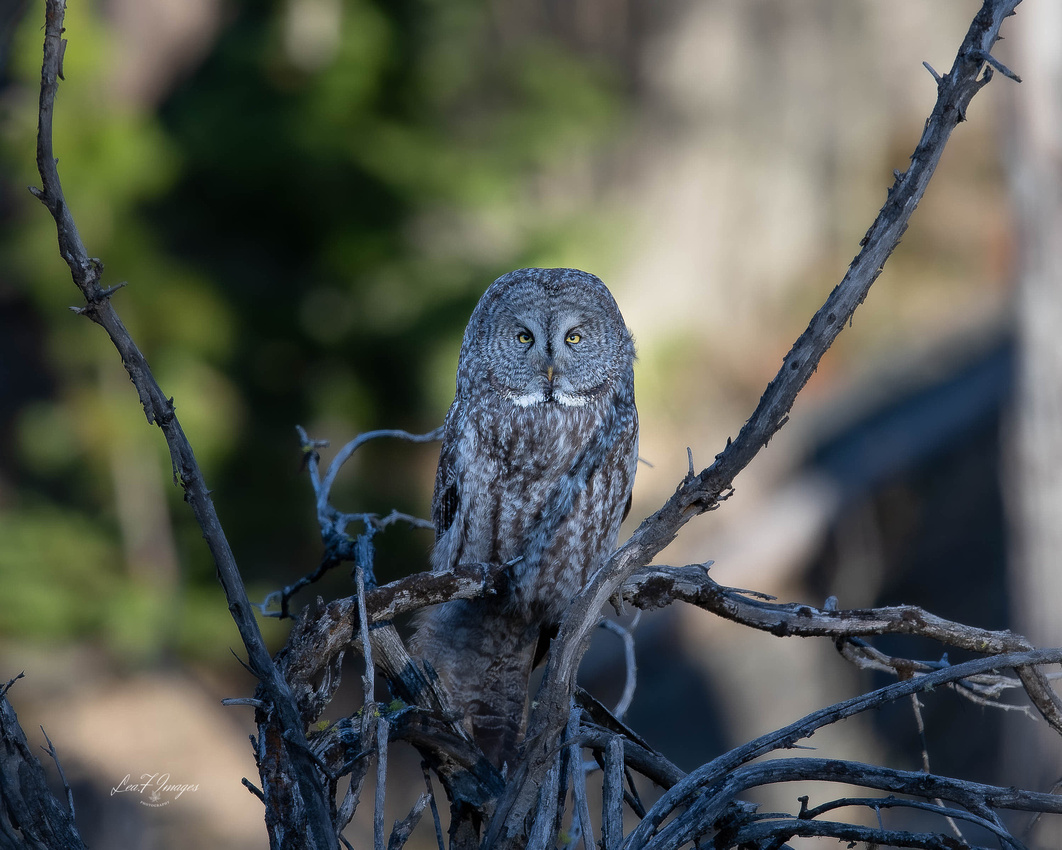 Sometimes the coolest part of an animal encounter never shows up on film. That was certainly the case on the day that Lea got this stunning portrait of a great gray owl. For the last few weeks she had been working a section of Forest Service trail and finding owls probably every second or third trip. The trail got a lot of use, and Lea had already come to understand the the owls seemed to be quite comfortable with people, just watching and not flying off, as people walked, or even rode bikes down the trail. Still, when we spotted this one, she set up the camera a good forty yards away, with the hope that we could just watch its natural behavior, and not influence what it did. She had no idea what she would be in for!

The owl sat on its perch, and Lea clicked away with the camera. I enjoyed watching how the owl would scan the area. Even though it looked like the owl was trying to see things, most owls, especially the great gray, hunt by sound. Even in daylight, as the owl turns its head, it brings its acoustic disk to focus in the direction it is looking. The disk is the ring of feathers around its face, and it works just like a directional microphone. Great gray owls can pinpoint sound so accurately they can actually catch mice tunneling under the snow, just by sound alone, regardless of available light. I noticed that it was spending a lot of time gazing at a point just to our side, and figured there might be a small rodent in the area, but that didn’t prepare me for what happened next. Laser Focused (Great Gray Owl)The largest of our owls is the great gray. They live and hunt in the boreal forest of Western Montana. Taken in Butte, MT.

In a quick motion, the owl jumped into the air, and started flying. Straight at us! You have to understand, these are the largest owls in North America. Having one coming right at you is a bit intimidating to say the least. Still, neither of us perceived a threat, and just watched as the bird grew bigger and bigger, then tilted up right in front of us to silently land in a snag about ten feet away. The owl was intently focused on a patch of weeds to our side, paying no attention to us. “Its too close for me to shoot” Lea whispered in my ear. “Just enjoy the experience” I whispered back.

The owl stayed on the snag for maybe two minutes before falling off the perch and dropping hard into the patch of tall grass. The impact with the ground was the only thing we heard. Although it was close, you could really only make out a bit of an outline through the weeds. I may never be able to say for sure, but it sure looked like its head was down at its feet, likely gobbling up the small animal it captured. After a brief time on the ground, it hopped up onto a fallen log for just a moment, then took off and disappeared into the woods.

Lea and I started breathing again. Such an amazing raptor. So insanely close. A totally raw moment, yet so beautiful to watch. More than anything else, it is these encounters that feed our love of wildlife, and keep us coming back time after time.

It has been a hoot,